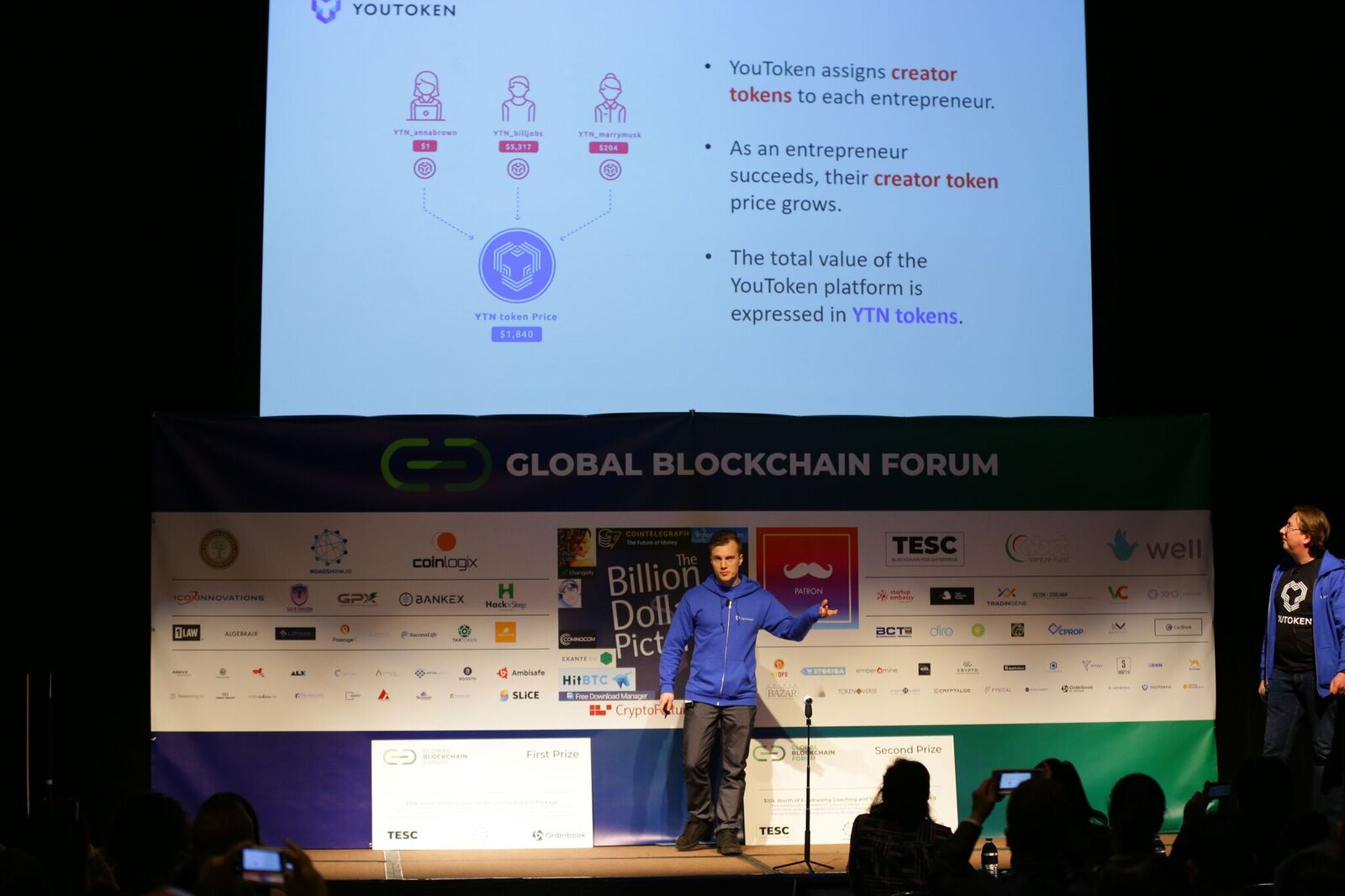 YouToken (YTN) presented its innovative blockchain-based crowdfunding platform to over 1,400 attendees at the 2018 Global Blockchain Forum (April 2 - 3, 2018) in Silicon Valley, California.  Up to 40 global promising startups attended the event with YouToken leading and disrupting the way in the FinTech and crowdfunding sector. Based on blockchain technology, the platform aims to connect investors with entrepreneurs via crypto tokens and ultimately capitalize on a project in its early stages of success.

By minting each entrepreneur on the platform their own personal, creator tokens (expressed as YTN_creatorname), YouToken discovered a way for early-stage entrepreneurs to literally sell their ideas to investors in exchange for starting capital on their project. In return, investors get a chance to capitalize on a young creator at their earliest stages of success. In addition, the platform offers four unique smart contract options:

On day two of the event, April 3, 2018, YouToken participated in an ICO competition comprising of up to 18 technology startup companies. Each project had just three minutes to present their idea core concept to a panel of five judges. YouToken CEO Ilya Volkov and CMO Ivan Kv used an interactive presentation and visual aids to inform the audience of the humanitarian-inspired blockchain based crowdfunding platform.

Stanford and MIT StartUp judge and ICO pitch competition lead-judge Vince Kohli had this to say about YouToken’s presentation:

“Heartiest Congratulations, Ilya Volkov and Ivan Kv of YouToken for winning the best top pitch @ ICO Pitch competition in Silicon Valley.  It was an excellent presentation that paints the clear value proposition and well-crafted thought leadership in startup entrepreneurial ecosystem.  YouToken (YTN) represents the pragmatic voice in the ICO pitch competition. An entrepreneurial mindset to thrive with a high degree of autonomy in a fast-paced environment. The ICO pitch competition was evaluated on four important criteria.

1.The clarity of the pitch with precise 3 mins time limit

(YTN) was a tie between another startup ICO company during pitch competition, both companies at the highest percentile. It was very challenging as a judge, however, the key differentiator of YouToken (YTN) was a future industry impact, which is of much higher order to future of humanity a scale.  I personally felt the overall Blockchain Impact of YouToken and network effect will be used by millions of users with an impact in the hundreds of millions of powerful human mindset.  Lightning Experience to the connected world is the future of YouToken (YTN)”.

At the close of the two-day event, the competition’s winners were announced, of which YouToken finished in the top three. Aside from the booth presentation and ICO competition, attendees were treated to a number of high profile speakers like renowned cryptocurrency venture capitalist Tim Draper, TechCrunch founder Michael Arrington, Co-Founder of Civic.com Vinny Lingham and Autodesk Innovation Genome founder Bill O’Connor.

While the 2018 Global Blockchain Forum came to a close, YouToken continues to work on the development of their platform. You can learn more about YouToken by visiting them at https://www.youtoken.io/.

The Blockchain-based crowdfunding platform that converts Human Intelligence into a financial asset - blockchain tokens.  The startup project was established in 2017 and operates under Singapore company YOUTOKEN CAPITAL PTE. LTD which has a number of offices located in Singapore, Silicon Valley, CA and Moscow, Russia.

Ilya Volkov - YouToken CEO and Co-founder has 20 years FinTech industry experience and has spent the last 10 years in a management board positions at International Forex Club Group of Companies (www.fxclub.com).